The Law Office of Tom Kirkendall > Background > Where I Practice

For over 35 years, I have had the privilege of being involved in cases from Europe to New York to Australia.

However, I have lived in Texas for over 40 years, and my family and I now have deep roots here. So, I primarily practice in courts throughout Texas and, in particular, southeast Texas.

Of my Texas cases outside the Houston area, most of those cases are in various state and federal courts within an area defined by a line drawn north from Houston to Dallas, then southwest from Dallas through Austin to San Antonio, then southeast from San Antonio to Corpus Christi, and then northeast from Corpus back to Houston.

My main office is located in The Woodlands, which is a suburban community in Montgomery County 30 miles north of downtown Houston.

As noted under “Client Meetings” in the Policies section of this website, I prefer to meet with clients where it is most convenient for them, which is usually the client’s office. However, if a client prefers to meet with me outside their office, I maintain multiple locations in the Houston area for meetings with clients. 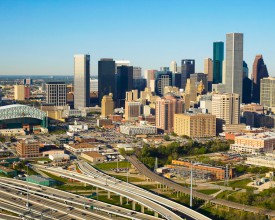